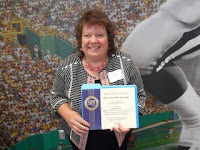 Bestselling author and award-winning journalist, Ginny McCabe was recently honored with six awards at the Ohio’s Best Journalism awards ceremony, which was held on Saturday, Aug. 26, 2017, at the world-renowned Pro Football Hall of Fame in Canton, Ohio.

Sponsored by the Cincinnati, Cleveland and Columbus Society of Professional Journalists (SPJ) chapters statewide, the Ohio’s Best Journalism Contest presented over 300 awards to journalists from across the state.

There were 315 awards announced out of more than 700 entries that were submitted for consideration.

Ginny has spent decades covering topics like news, music, theater, arts and entertainment, business and faith-inspired themes. In addition to writing regularly for publication, Ginny’s books have been published by Thomas Nelson/Harper Collins and Standard Publishing. She serves on the board of directors, and as secretary, for the Greater Cincinnati Pro Chapter of the Society of Professional Journalists. She is also a member of Christian Author’s Network and Advanced Writers and Speakers Association.

Ohio’s Best Journalism Contest is a statewide competition for the best in newspaper, magazine, television, radio, trade, digital, college and freelance journalism. Entrants submitted work from 2016. The Long Island Press Club served as judges for the contest. Entrants were not required to be members of SPJ. For a complete list of winners, visit www.ohiospjawards.org.

Read more at: http://christianauthorsnetwork.com/ginny-mccabe-honored-with-six-awards-at-the-ohios-best-journalism-awards-ceremony/
Posted by Ginny McCabe at 9:14 PM